“In all chaos there is a cosmos, in all disorder a secret order” Carl Jung

You are seeing this mantelpiece for the second week in a row because it is one of the few places in the flat that is not overwhelmed with cardboard boxes, homeless furniture, or unassorted junk from our recent move. To mix things up, I’ve arranged this week’s vase at the opposite end of the mantelpiece. Keeping it company is a very old, beautiful Japanese Buddha that The Brazilian inherited from his grandmother, who sadly passed away earlier this year. His inscrutable countenance as he gazes upon the chaos around him is something I am trying to emulate, with limited success. 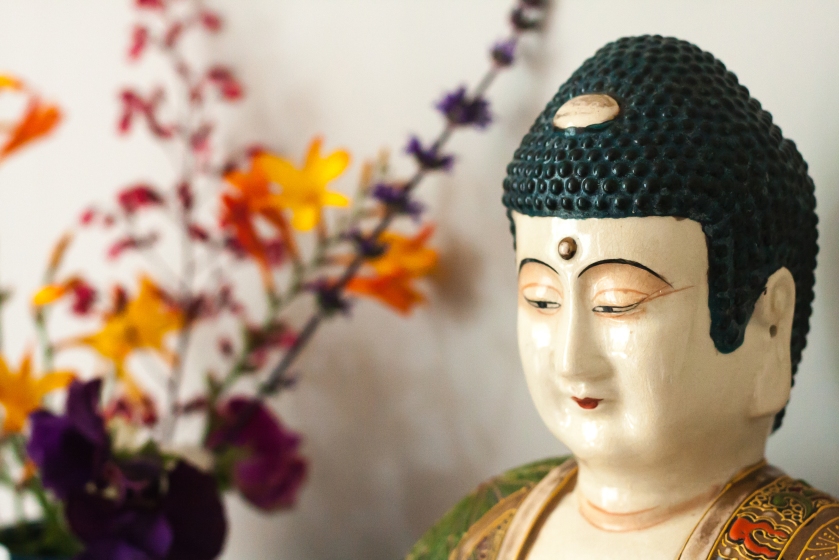 Anyway, an hour out of the unpacking to pick some flowers for today’s vase was most therapeutic. The garden is full of white Cosmos ‘Purity’, a most elegant cut flower that I have grown from seed two years in a row. The first year I sowed it where it was to grow, where it was promptly gobbled by snails. This year I played safe and sowed it in seed trays in the cold frame. The Cosmos has grown really quite tall, partly in search of light, no doubt (the front garden receives only a couple of hours sunshine a day); I should have taken the tops off to encourage the stems to bush out, but actually I rather like these tall, waving fronds, which are dotted among the roses, foxgloves and delphiniums.

And so in this first vase, we have Cosmos ‘Purity’ with sweetpeas (will they ever end?), Crocosmia (unknown variety), Heuchera ‘Silver Scrolls’, and Salvia nemorosa ‘Caradonna’. 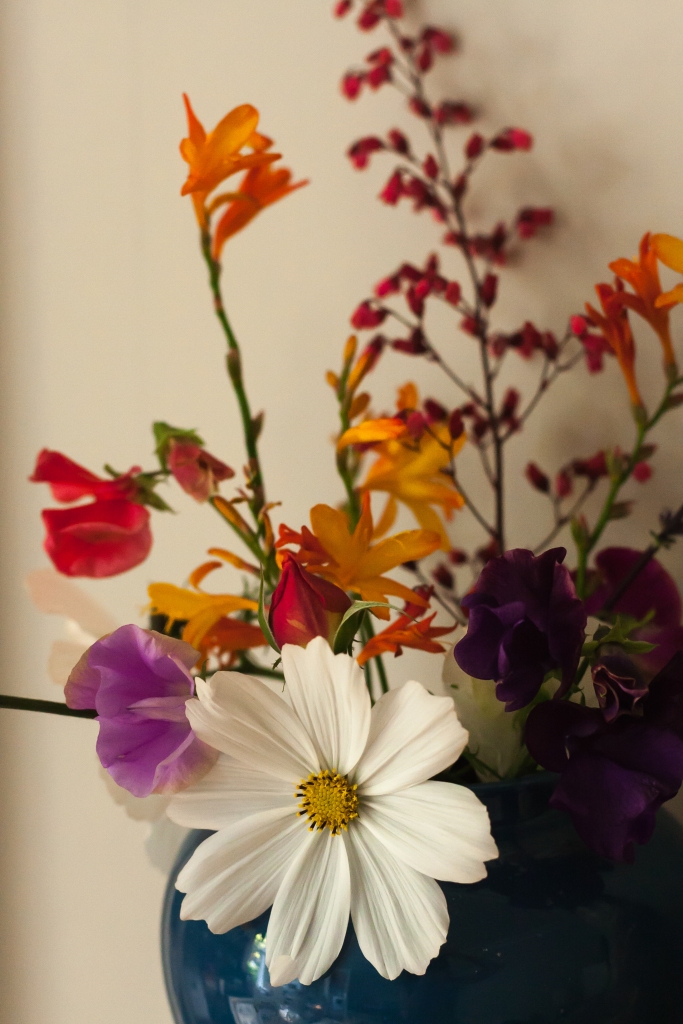 Now, because I have many extremely pretty short-stemmed flowers in the garden at the moment, I thought I’d make a much smaller vase out of this Vietnamese tea mug, which I picked up on some travels around Asia ten years ago. With a receptacle as small as this, flowers tend to be top heavy and tip out if you don’t put something inside the vase to hold them. I have no purpose-made flower arranging kit, but was easily able to fashion a spiral of garden wire through which to push the stems, and this worked perfectly. 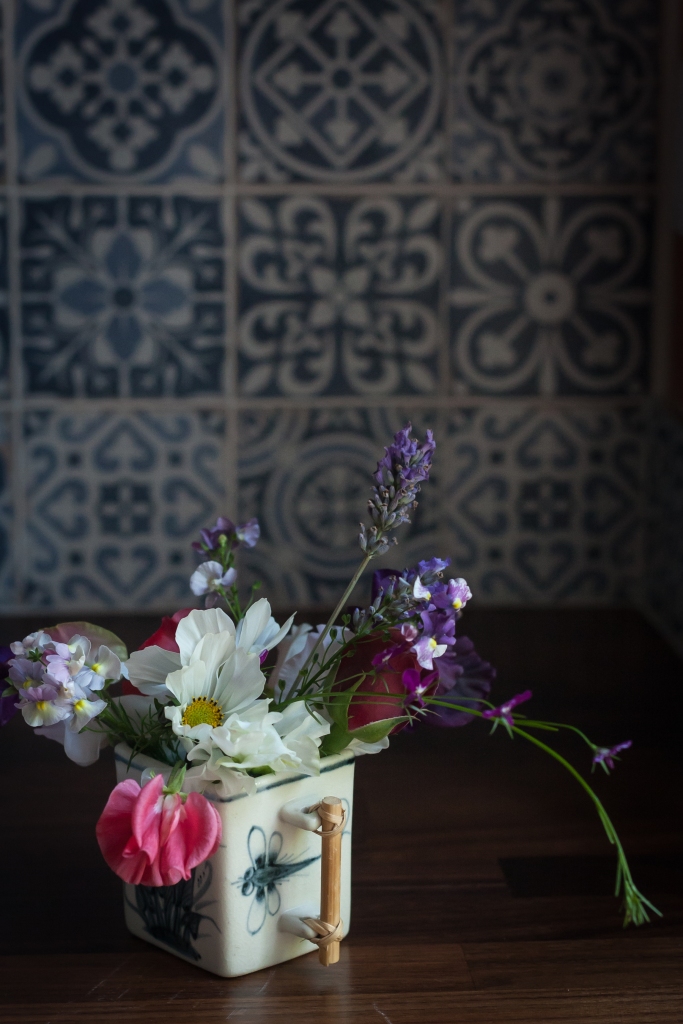 Another miraculous clear space, this time in the kitchen. And In this vase, more ‘Purity’ with sweetpeas, plus lavender, trailing lobelia, and a velvety dark red bud from my David Austin rose ‘Tess of the D’Urbevilles’. 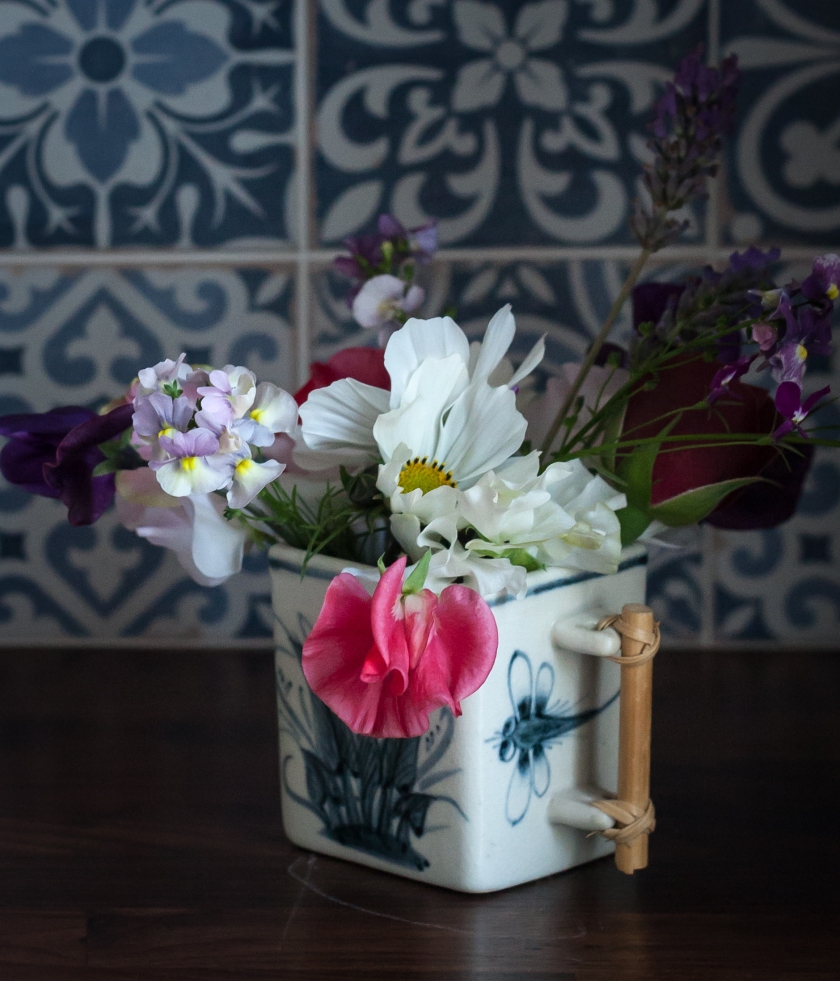 Yet after these two vases there were still sweetpeas and Cosmos to be picked, and so I created a third vase, leading to the challenge of finding a third clear space in the flat in which to put it. This is The Brazilian’s desk (or rather my desk that was a gift from The Brazilian but which won’t fit into my new study, sadly). 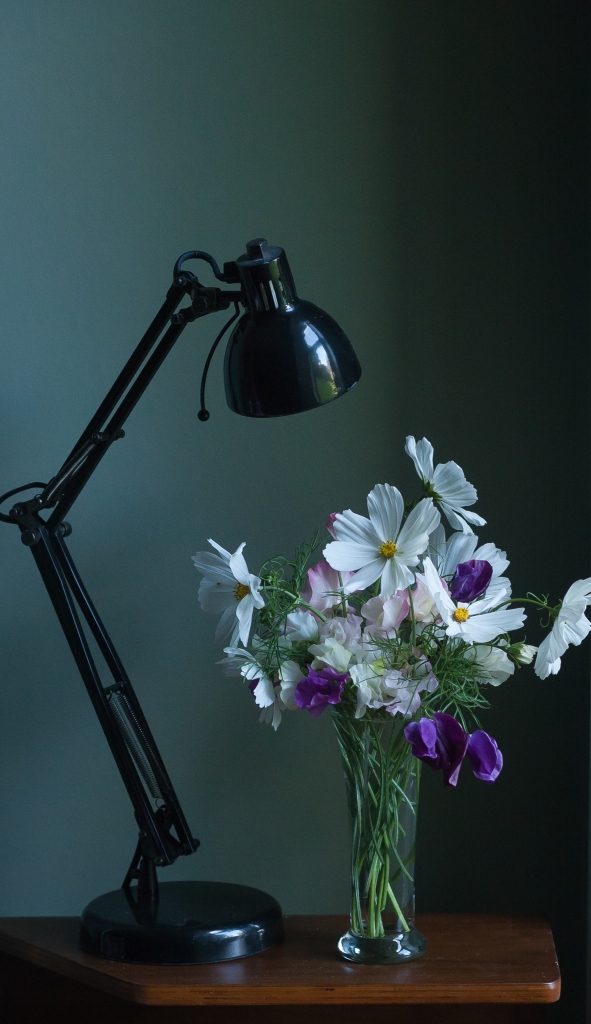 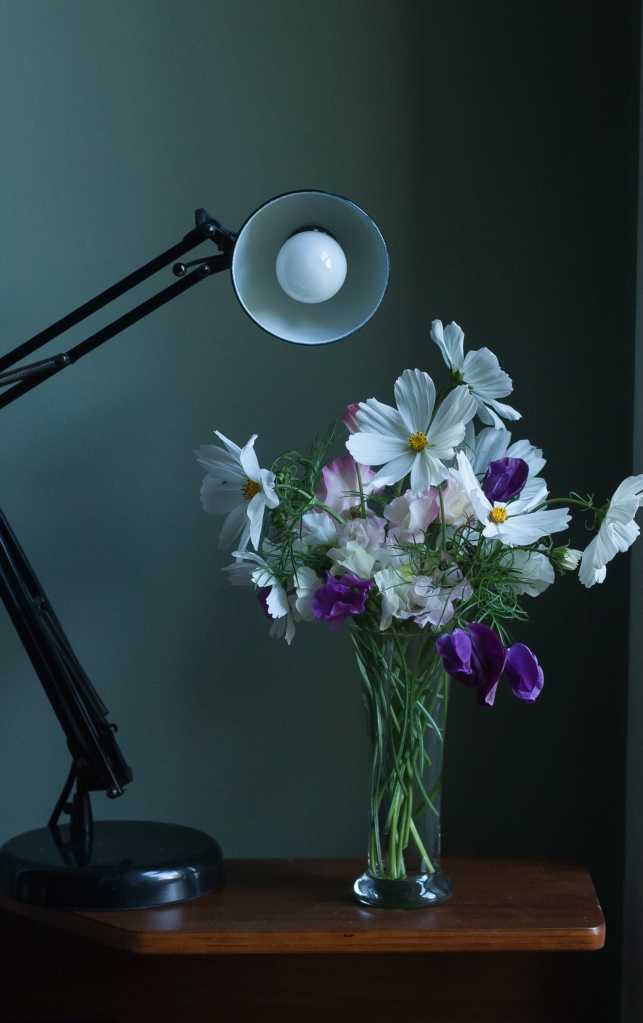 And so in three clear spaces in the flat I have managed to create order, with thanks to Cathy at Rambling in the Garden who hosts ‘In a vase on Monday’ every week. Please visit Cathy’s blog and take a look at the other wonderful flower arrangements that have been created today.